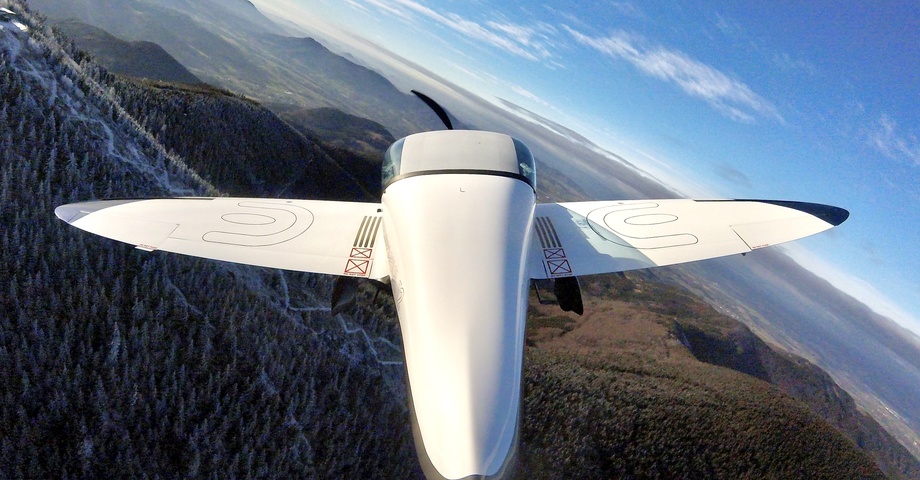 Our ultralight plane ellipse, with its name and of course visual shapes, refers to the elliptical shapes that often evoke the wings of the legendary Spitfire fighter. But what is actually behind this shape? What does it bring to pilots? What does it mean for manufacturing? What benefits does it have for today's pilots? How do we address the trade-offs and regulatory requirements for a modern, fast and safe ultralight aircraft?

In our short series, we'll break down the main elements of the elliptic wing – from the past to the present, including aerodynamic simulations and a look at modern carbon-based manufacturing that has made technologically possible what was impossible fifty years ago.

Theorist Ludwig Prandtl (1) is the author of the 1918 theory of the finite span wing, which, in simplified terms, defines the condition at which minimum induced drag is achieved in an untwisted wing.

And it was already the first aerodynamic study that showed that the elliptical wing plan was the ideal solution to minimise induced drag, and the first aircraft with an elliptical wing took off in 1925 –the German Bäumer Sausewind. (2)

The first aircraft, called Bäumer Sausewind, produced by the same name company from Hamburg, showed the tremendous performance potential of the wing. The two-seater aircraft reached speeds of up to 170 km/h, and quite naturally, further development of concepts and planes with this wing was on offer.

However, the Günther brothers, the company's designers, soon joined the German aircraft manufacturer Heinkel, who wanted to apply their designs to its aircraft. In the early 1930s, Heinkel quickly developed a mail plane and reconnaissance bomber, the Heinkel He 70 "Blitz", which already had an improved elliptical wing.

These planes proved to have outstanding performance for the time; they set eight separate world records for distance speed, and the He 70 reportedly reached a top speed of 377 km/h (222 mph). (3)

Heinkel afterwards developed the He 111 bomber, which made its maiden flight on 24 February 1935. Compared to the previous He 70, it was a larger aircraft, originally masquerading as a civil transport aircraft, although it was designed from the outset as a bomber.

After World War I, however, Germany could not produce fighter and bomber planes, so this aircraft was declared purely civilian. Bombers He 111s were also provided with an elliptical wing. The main reason for discontinuing the development of the elliptical wing on the He 111 favouring the traditional wing was purely economic. The ease of production took precedence over the performance the wing delivered.

The interwar period is characterised by the rapid development of aviation and rapid advances in aerodynamics, strength calculations, and aircraft construction technology. Therefore, it is understandable that there was a desire to apply the latest findings in aerodynamics to new types of aircraft as soon as possible.

The innovation cycle at that time was much faster than it is today, as aerostructures were much more straightforward, and the regulatory base was also more superficial. So time played a role, which could have provided a significant competitive advantage when aircraft performance was moving forward by leaps and bounds between generations.

Efforts to apply even the latest aerodynamic knowledge

An interesting example is the English Dragon Rapide. (4) In its day, it was representative of the receding concept of conventional biplanes. It had an elliptical wing to make the most of this concept. Development then quickly moved toward self-supporting monoplanes, made possible by better materials and advances in theories of strength and flexibility of metal structures. Struts and cables were eliminated, and the speed of aircraft increased significantly. Efforts to apply even the latest aerodynamic knowledge resulted in the broader use of the elliptical wing planform and relatively recent innovations – slots and fowler flaps.

However, as an ideal theoretical solution for a finite span wing, the elliptical wing is not entirely without compromise. If it weren't, we'd probably be seeing a lot more of it. Part of the problem with this wing is that when the critical angle of attack is exceeded, the flow on the wing is stripped away all at once, which is not advisable from a safety point of view.

It is essential to protect the aileron area from this phenomenon, so compromises are made, such as twisting the wing or replacing the elliptical wing with a twisted trapezoidal wing (which may be an equivalent solution in terms of induced drag, especially in conjunction with simpler manufacturing technology).

Another, and perhaps even more important, is the technological aspect. To produce an elliptical wing is very complex and laborious. At the same time, as already mentioned, certain compromises have to be made for other reasons.

For this reason, designers often choose a different wing plan, which results in a wing that is similarly clean to an elliptical wing but with far fewer manufacturing problems. Perhaps one exception has been military fighters, where the performance requirement has been prioritised.

Aerodynamic purity of the elliptical wing

However, the time has shown that in mass war production, modifications were then made to the planform of the elliptical wing to make the wing faster and easier to produce. Thus, even here, a technologically simpler wing proved to be a better compromise. The World War II period was also the peak of piston engine development, so this aspect also played a role in the final performance of the military aircraft.

Thus, the elliptical wing remains the domain mainly of various special aircraft. The requirement for aerodynamic purity or a particular aircraft function overrides the rest of the compromise mix of a given concept. Nowadays, the technological complexity of the elliptical wing is greatly facilitated by computer technology, digital machine tools and especially composite technology.

Nevertheless, some problems remain, and, as a result, the eventual renaissance of the elliptical wing is not as significant as one might expect. Indeed, compromises have to be made even today, and current developments are proof of this. Nevertheless, such wings are being developed, and they give pilots flying such aircraft the feeling of an exceptional flying experience with a still fascinating and inimitable wing combined with its uncompromising aerodynamic characteristics.

In the second part of the series, we will discuss how to make compromises a priority for safe, and fast-flying and how the aerodynamic problems outlined were solved by using a fixed slot on our particular ellipse aircraft.